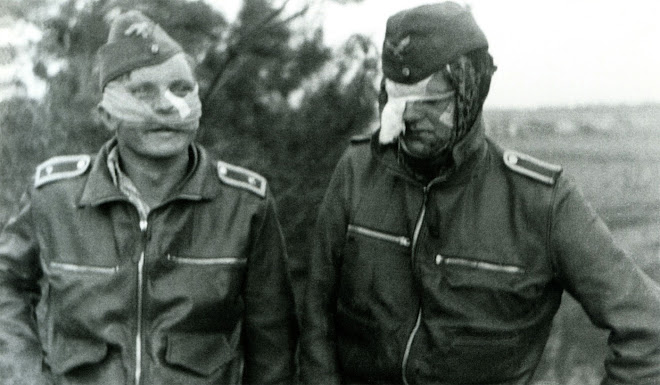 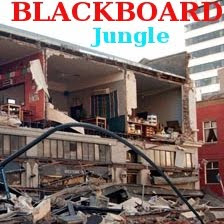 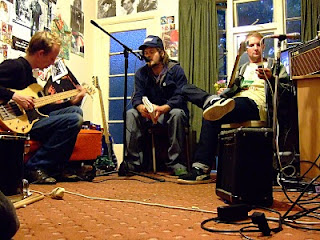 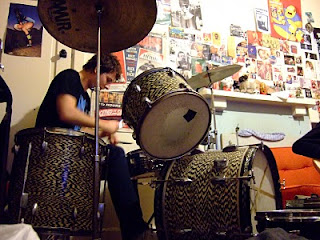 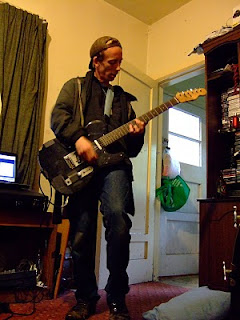 This is somewhat of a greatest hits package that I put togetther of my brother Kyle's rock group called Blackboard Jungle.Although they recently changed their name to Asshole Rebel Unit I thought it best to stick with the old moniker as most of the tracks included are from that period.Steve plays bass and handles most of the vocals,Kyle plays guitar and sings on "I'm So Bored",Chris plays drums and unfortunately I have forgotten the other two musos names who sometimes play with these guys(I will add this information when I get the data).
They regularly practice every Saturday at Steve's house under the trees next to Canterbury University on the banks of the mighty Ilam Stream.I have had the pleasure of visiting a couple of practices and they are a low key affair with instruments being shared in a rather socialist manner.No rock star egos here...
No-one knows about them due to their lack of interest in self-promotion and I think it adds to the home-on-the-ranch vibe of these recordings. I reckon they should play to the public more often outside their idyllic headquarters but they seem content in their ways. It's punk,funk,metal,reggae,brain splurge paranoia and cathartic frustration..
Anyhow,I am a fan and here it is for your consumption;I just hope more people get to hear this ultra-underzone Christchurch band and perhaps they will play a Battle of the Bands sometime soon...
the best thing about Christchurch
P.s.All recordings were done on one microphone sent into Kyle's laptop.This is lo-fi so have a smoke...
Posted by Lynton at 4:27 PM 4 comments: 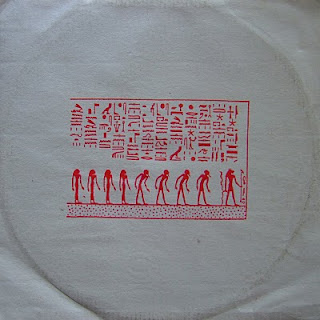 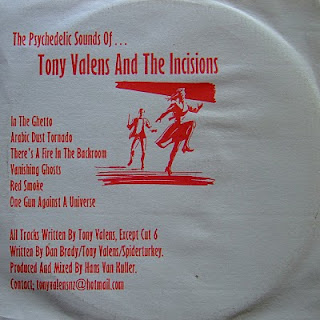 This is a band that I played in for a year or so back in Christchurch around 200-2001(this is a guesstimate as my recall is a bit skewered).It was led by Nick Hodgeson who was a very prolific lad on the local experimental music scene establishing such acts as the C.M. Ensemble in the local conscience.Dan Brady played bass,I played drums and Nick(Tony) explored the electrical possibilities of the guitar.Blue Cheer meets Link Wray.Maketh my day.
We recorded on an old tape cassette deck that gave the album an interesting "suction" effect during the silent passages.The drums and bass had one microphone and were set-up in the library of the old sea captains house that I lived in.Tony had a mic all to himself and played through a tiny practice amp much to the annoyance of my flatmates in this Lyttelton mansion.
Dan blew my Holden bass amp.I think it was the feedback.Keep your ears out for my beer bottle percussion.
We played a few shows and parties around town until I got kicked out for being too drunk...
I shall post some other recordings we did with AlC5 on bass and the legendary Wunderbar gig where I played two drumkits and were graced by a sleazy guest on saxophone. Kato Records have released a cd of the previous line-up which is more of a fifties rock and roll noise as opposed to this metal mannered beast. In fact Dan and myself enjoyed the previous incarnation of the Incisions so much that we managed to prompt Nick into getting this version of the band up and running after a year or so of retirement...See what you reckon,comments are compulsory.
PleaSURe caN bE pAInFuL
P.S.Let me know if all the tracks work as I have tried for the first time to upload this as a zip file and am not sure if I did it right.
Posted by Lynton at 9:00 PM No comments: 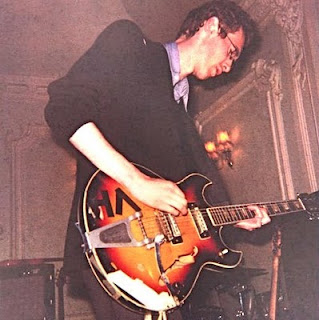 It's been a few month's since I have posted anything because I have been without the internet.The Bat's back!
Recently a very good friend and artistic collaborator of mine passed away.Richard Neave had recorded this album and had given it to his friends Sharon and Karl in Christchurch.He told them that the tunes hadn't been titled yet and if they had any ideas for names he'd be keen to hear them.Unfortunately he died before this process was complete so i am posting this recording as a tribute to a truly great friend.
I didn't feel like doing a speech at his wake last week so I guess this is where I will share a few words of appreciation.....
I met Richard Neave when i moved into a flat about fourteen years ago at 45 Holly Road,Christchurch.He seemed very nervous and we instantly bonded over a smoke and an episode of Sapphire and Steele.The first time i saw him play was after Mincheng moved in and he invited us into his darkened room where we were instantly assaulted with a barrage of treble.He started to scream into his guitar pick-ups and I thought that something was wrong and that he might do something violent to us!Catharthis.
Mincheng,Ricko,and myself(Lynton) soon organised ourselves into a disorganised music animal called the James Last Appreciation Squad. Our drums and guitars played or rather stormed a few venues around town such as the Blues Bar during their jam night.Hamish Noonan joined us for some of these and I remember the soundman asking us not to break anything.To their credit they let us have five minutes and then pulled the plug.Plug pulling was a common event except when we imposed our racket on friends who I guess have a palate for this sort of hi-jinx.We made our own fun.Toy Love's bass player pulled the plug when we played the amphitheatre at Canterbury University.Apparently we had complaints from the lecture theatres.This performance was my good bye to uni life and also part of a local protest group's Indonesian invasion of East Timor statement.You could say we were boozey and drugged and I guess conflict is a bit like that...
Anyhow I coined Ricko's nickname which he once told me to stop using;I thought it suited him and kept calling him that.He didn't mind after a while and the Ricko persona continued to thrive and grow often putting us into awkward situations that afterwards made me laugh.
Richard was very unsentimental and never wanted to draw any attention to his problems but would instead try to offer others his warm hospitality.I hope he is bursting angels eardrums in the sky!
He definitely pushed himself to the limit and had very little time for lower frequencies and instead opted for ultra-treble which would carve out new destruction within one's earcanal!
I do not know who else appears on this recording but there is perhaps a drummer.If anyone wants to fill in the details of this recording feel welcome to do so...
I miss you greatly.
BLOW YOUR SPEAKERS!
track one
track two
track three
track four
track five
track six
track seven
track eight
track nine
track ten
(p.s.Thanks Chris Andrews for taking the photo of Richard and letting me use it as an album cover and thanks also to Sharon and Karl for passing the c.d. on to me so I could publish it..)
Posted by Lynton at 6:26 PM 1 comment: